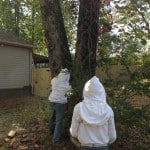 You may have noticed, but honey bees have been in the news frequently over the last few years. Some news reports cover aggressive Africanized Bee attacks, but many more have covered the decline in Honey Bee populations. At Scout Pest Control, we feel a strong commitment to protecting bees, which includes helping them to establish or relocate their colonies to safe areas. We do this through capturing bee swarms, and through removing hives that have located in unwanted areas.

Bees are a very beneficial insect, they are necessary in the pollination of many of our crops and plants. It has been said that up to 1/3rd of our food supply would be eliminated if we were to lose Honey Bees. They provide an important service in both increasing crop production, and in cross pollinating plants and trees to help make our plants more genetically diverse. Many people also claim various health benefits from eating honey from local bees.

Bees naturally spread and populate through splitting a bee hive, or bee colony. Usually in the Huntsville Alabama area this happens during the spring, but it can 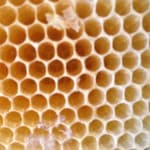 happen during the summer, or on rare occasion during the fall as well. When bees swarm, or leave their hive to find another, a large group of bees heads out with a queen looking for a new home. Swarms often are made up of thousands of bees, and can be a little intimidating for the uninitiated. While Bee swarms can be alarming to an unwary homeowner, if you see a large ball of bees hanging from a limb, an eve, or other locations, you can take comfort in that they probably won’t be there long. Often times Honey Bee Swarms pause mid trip to let the queen rest, or they may nest in a location for a few days to a week while scouts attempt to locate the best home for the colony.

Once the scouts come back, they will lead the colony to their chosen location to set up their hive, to begin comb and honey production, and to make a more permanent home. Once established in a hive, bees can become more aggressive as they attempt to defend their home. In the wild, Bee Hives are often located inside of hollow trees, in stumps, and at times in small caves or crevices. They usually do not like to build a hive in the open, but on occasion will build them on a tree limb. In an urban environment it is common for bees to make their hives in wall voids, attics, and other accessible locations around a home. Once established, the bees begin honey production and removal is a lot more involved. DO NOT attempt to kill bees nesting inside or around your home. You will likely upset them, and will almost certainly not get rid of the problem. Even if you are successful in eliminating the colony, you will then have to deal with up to several hundred pounds of honey buried inside your walls. When left untended, honey from the hive will begin to run, attracting many more pests, causing damage to your home, and most likely luring in a neighboring hive to rob the honey. If you want to get rid of a Honey Bee problem, it’s best to call an experienced bee keeper to come and rescue the hive.

The best method of removing an unwanted bee colony is to catch them before they begin building their hive. If you see a basketball sized ball of bees hanging anywhere around your home, call us quickly and we can come and capture the colony. This is a best case scenario, because they have not begun to build Honey Comb, or to make Honey, there is no mess to worry about, and no hive to remove. The key here is to call as soon as you notice the swarm. It is common for swarms to “take a break” mid trip to their new hive, and they may be there for anywhere from thirty minutes to a few days. While they are there, the queen is sending out scouts to find and locate a new home, which could be close to where they are swarming. Don’t wait, call now!

Once a colony of bees has established itself inside of your walls, or elsewhere in your home, it needs to be removed. There are a few ways to remove bee hives from homes. The most common is to do what is called a “cut-out.” This is possible when the location of the hive is known. One of our technicians opens the wall, either from the inside or from the outside depending on the construction of the home and the location of the hive, and physically removes the honeycomb, and uses a specialized bee vacuum to capture alive the majority of the bees. Performing a cut out allows us to remove the hive and the bees usually in one visit. We can provide prices for doing just the removal, or for doing removal and repair to the home.

Another way to remove a bee hive from inside of a wall, eve, or other location is to do what is called a “trap-out.” This is less invasive, normally there isn’t any disassembly of walls or other parts of the home, and so it can provide an advantage in certain circumstances. The disadvantage of doing a trap out is that it takes much longer, up to a few months to complete. Using this process, most of the bees are integrated into a new colony, which is later used to rob the honey from the old hive. This method can also bee more labor intensive, and prone to failure.

Good for the bees, and good for us too!