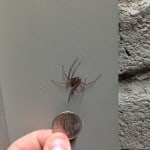 Scout Pest Control is an expert at controlling spiders, including black widow and brown recluse spiders, two highly poisonous spiders in the region. There are many other spider varieties that do not pose any particular danger to your home and family, but if you see even one black widow or brown recluse, it’s important to take action.

To identify a brown recluse, look for five things. One, the color—it ranges from yellowish to dark brown and is slightly darker in the center. Its legs are lighter brown and uniform in color. If the legs are darker or have stripes or mottled color, it is not a brown recluse. Two, look for a violin shape on the body—it’s not clearly defined, so may not look exactly like a violin, but there should be a slightly darker color than the rest of the body. Other spiders can have similar shapes. Three, count the eyes. Brown recluses are unique in that they have only six eyes, arranged in pairs. Their eyes are small, so you may need a magnifying glass to count them. Four, check for short, fine hairs on the spider’s body. It doesn’t have spines, however. Five, consider the body’s width.

To identify a black widow spider, first look for red markings on its body. Female black widows have two red triangles in an hourglass shape. Occasionally there will just be one triangle or the hourglass can be yellow or orange. Male black widows have a distinctive pattern on the abdomen consisting of reddish dots and yellow or white lines. Next check the color—females are generally shiny black, but can range to dark brown. Males are lighter in shade, generally brown or gray. Also consider the shape of the abdomen—a black widow has a plumb, rounded abdomen directly attached to the head. The head and abdomen will be the same color.  The Brown Widow Spider is like a black widow spider, but it is an invasive species coming in from Florida, that originated in Africa.  They are spreading around the world from international shipping, and can reproduce in higher numbers and live in a wider variety of areas than a traditional black widow.

If you find a brown recluse or black/brown widow spider, alive or dead, professional treatment is needed, due to the severity of their bites. Scout Pest Control can quickly identify these spiders and choose the right treatment to protect your family.

While they aren’t as dangerous, there are many other types of spiders that can be considered as pests. Seeing a wolf spider come running across your floor, any time of the day or night, can be unsettling. Or having so many spiders in the grass around your home that kids won’t play outside is a problem. Also the unsightly webs that house spiders leave in the eves, or that cellar spiders can leave around baseboards and in garages, is both annoying to have to clean and unattractive to have on your home. At Scout Pest Control we can control many different types of spiders. Give us a call for a free evaluation!