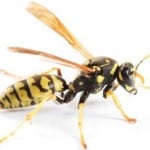 Wasps have smooth, bullet-shaped abdomens and dark wings. If you see a nest, you have a problem, with hundreds and even thousands of wasps likely living there. It’s hard to prevent wasps from building a nest, but it helps to keep food and beverage covered, as well as waste containers, and keep your home and yard clean from spills which feed them. Our professional treatment will also help with wasp problems. Wasps cause problems especially to those allergic to their stings. They easily anger if their nest is disturbed and will sting you.

Bald faced hornets can spit venom, often even through the mask of a bee suit. They are larger than wasps, and are also take longer to die after being sprayed. They can be very aggressive, and should be left alone. 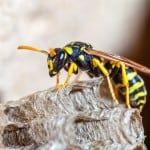 There are many different types of wasps found in North Alabama. It is important to be able to identify them in order to know which solution for control is best.

Yellow Jackets are well-known – the most common wasp species in the United States –  and are easily identifiable by their bright yellow and black coloring. Yellow Jackets are sometimes confused with bees, however they are skinnier and much more aggressive. They are most common throughout late summer to early fall due to an abundance of food sources, especially sugary food sources like berries, plant sugars, and even soft drinks! Their nests can be found anywhere from the eves or attic of a home, to a hole they have burrowed in the yard. Yellow Jackets are extremely dangerous. They are highly aggressive and the venom from their sting is stronger than a bee’s.

Bald-Faced Hornets are black and white and characterized by yellow bands on its bottom – so it is no surprise that they are in the Yellow Jacket family. These hornets can range from 12-15mm in length which is large for a wasp, queens can grow up to 20mm. Typically, they prey on other Yellow Jackets, bees, flies, and other insects. Bald Faced Hornets can become easily agitated if you are anywhere near their nest and can sting repeatedly, even stinging through bee suits and Levi pants!

Bald Faced Hornet nests can be found above ground and are easily identifiable by their greyish paper material they build the nest from and it is shaped like the cartoon bee hives you would see on Winnie the Pooh. They like to build their nests in trees and shrubs, but can also build nests under eaves and on the sides of homes or businesses. It’s important that the nests of Bald-Faced Hornets are exterminated as soon as they are identified because these hornets can build large and highly aggressive colonies.

Mud daubers, or most commonly called “dirt daubers” in the South, have a solid black body and yellow stripes and legs. They are not as dangerous or aggressive compared to other types of wasps; however, they will sting if they are provoked.

They build their nests by rolling up balls of mud and putting them together with a hole in the middle to store their eggs. They will often sting and paralyze spiders and other insects to stuff in the hole as food for their emerging babies. The nests are commonly found under eaves, on exterior walls, pergolas, and other semi protected areas.

One of the most common types of wasps, the Paper Wasp looks for wood sources on and around the home to build their nests. The nests are built with open honeycomb-like structures that are attached to walls and ceilings under eaves. Although they have a painful sting, they are not as aggressive as other wasp species and can be helpful as they eat some types of plant-destroying caterpillars.

Alabama Red Wasps are one of two existing species of red paper wasps. These wasps are a small, inch-long flying insect with a bright red body, dark wings, and a powerful sting. There’s a dense population of these wasps in Alabama, especially in the summertime. Alabama Red Wasps are more aggressive than other species of paper wasps. As with all wasps and bees, only the females of the species are capable of stinging when provoked. Females make up the majority of every wasp and bee colony.

Red Wasp nests are built by breaking down plant and wood fibers to form a papery, honeycomb-like structure. They can also live in hollow spots in trees or beneath underhangs and bridges.

People often confuse wasps and bees. There are many types of bees in Alabama, but most of them are not pests and should be handled differently than wasps. Much of our food supply is dependent on the work bees do to pollinate crops and fields. Because of their beneficial status, we do our best to protect bees.

Honey bees will occasionally make nests inside of homes, mainly in the eves or wall voids. We are one of the very few companies that will come and remove the nest, removing the bees and honeycomb, and relocating them to a new hive in a better location. It is important to have the hive itself removed to resolve problems with honeybees. Sometimes we see where homeowners will kill a hive rather than remove it, and this is almost never a good option. Some of the problems you will encounter are: that they end up with years and years of problems with more hives returning in the future because they smell the old honeycomb; they will often see staining and molding from untended honeycomb in the wall; they will often have to deal with many other insect issues as ants, roaches, and other pests flood to the hive to feed on the honey and wax left behind.

If you identify any of these species of wasps commonly found in Northern Alabama, give us a call and we will be happy to provide the best solution to your specific issue!